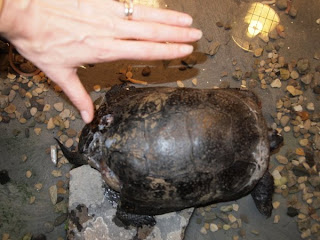 2010 has been a busy season – but unlike turtles we do not take a break to hibernate over winter! This year we have had 18 batches of turtle eggs hatch at our centre, with the last batch hatching as you are reading this. Many have already been released back into the wild, but it is too cold to release those that are hatching this late.

Although nesting season is the peak of admission, we are still busy admitting turtles well into the fall. In the past few days we have a badly injured snapping turtle on it’s way in from a wildlife centre near Sudbury, and painted turtle admitted with an abscess on its face.

This past week we also admitted our SECOND Stinkpot of the year!. This is a species we do not often see at our centre. Stinkpots, or Eastern Musk Turtles, are ranked “Threatened” by both the provinicial & federal governments.

Blanding’s Turtles, like the one pictured above, are also a Threatened species. Although still relatively common in the Kawarthas they are not common across Ontario and are in fact Endangered in the maritimes. Visit the Ministry of Natural Resources Species at Risk page to learn about species at risk in your part of Ontario.