Ontario’s turtles are all considered semi-aquatic, which means that they spend time in the water but also spend time travelling on land.  Some-like the Wood Turtle – spend significant amounts of time away from and out of the water. Others, like the Spiny Softshell, like to stay very close to water at all times.

Both male and female Ontario turtles travel on land during the spring, summer and fall seasons. In fact, at OTCC, we annually see the same number of males as females, admitted to the hospital Turtles  wander overland to search for mates, establish new territories, or to move between wetland complexes and other aquatic habitats. They also all lay their eggs on land, and often this is quite a distance from water.

This means that Ontario’s turtles are at risk of injury and death on roads across the province.  In fact, this is second only to habitat loss as a cause for their population declines.

At the Ontario Turtle Conservation Centre, the majority of the admissions to our hospital (Kawartha Turtle Trauma Centre) originate from road injuries. We have admitted all of Ontario’s species of turtles to our hospital, however the species that we admit the most frequently are Snapping Turtles, Painted Turtles, Blanding’s Turtles, Map Turtles, and Musk Turtles. Wood Turtles and Spotted Turtles are also seen, but are considered endangered in Ontario, so their numbers are low. 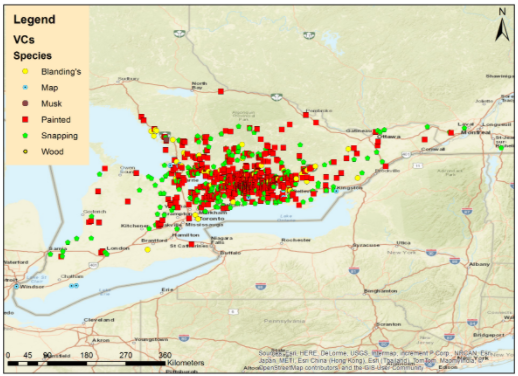 Admissions to OTCC for the past 5 years (above)

Many animals are hurt or killed every day on roadsides. But the life history of turtles is unique in that the death of even  a small number of  adult turtles can have a large negative impact on the entire population. The rehabilitation of Ontario turtles is far more than the compassionate gesture of a caring community.  This is a veritable conservation program, helping to reverse the impact of roads on turtle populations.

To understand why treatment of injured turtles can actually contribute to species recovery, we need to delve into their biology and reproduction to understand traits that are vastly different from other classes of animals.  Their biology greatly differs from other species of wildlife, that have a much higher ability to replace themselves in the population over a shorter time.  Other species mature quicker and have higher survival of young.

Every year, OTCC admits the same number of male as female turtles.  (‘unknown’ refers to hatchlings or juveniles, whose sex cannot be determined)

Comparison of reproductive potential among game species in Ontario

At OTCC, the hospital remains the ‘hub’ of our conservation initiatives.  Since many of the female turtles admitted are carrying eggs, we also ensure that none of these eggs are lost.  We collect, incubate, hatch and release these babies, back to the mother’s wetland.  In 2017 alone, we incubated over 3600 eggs!  While most of these would not have survived in the wild, we can increase their survival by hatching them at the centre, and by releasing many of them at a larger size, to increase survival even more.

Our field work is following a group of these ‘headstarted’ Blanding’s turtles, to ensure we maximize their survival, and increase their chance of going on to add to the adult population.  This is a long-term study, going into the seventh year.

While the hospital helps to reverse the impact of roads on turtles, the ideal goal is to actually PREVENT them being injured or killed, in the first place.  This requires:

Our Ontario turtles are semi-aquatic; while they spend a lot of time in the water, they also travel on land a lot too.  They will be on the move any time from April to October, although the busiest time for them is May and June. Females travel the most in June, as this is their most important time for laying eggs.  To learn more about turtle nests and nest protection, read our Turtle Nests and Nest Protection page.