The shell is green above and bright yellow below with a central dark blotch. The upper shell is fairly flat and flares at the rear margin. The under side of the margins of the shell have patterns of red and black and appear to have been painted on hence the turtles name. The head is green with yellow stripes and spots and the stripes turn to red on the legs. The feet are webbed. Two subspecies, the Western Painted (C.p.bellii) and the Midland Painted (C.p.marginata) live in Ontario.

Painted turtles are excellent swimmers and avid baskers which is why they are so conspicuous as they will gather in large numbers on a site such as a fallen log, to bask.  Painted turtles have recently been reclassified from Not at Risk, to Species of Special Concern, federally. Provincial status is pending discussion. Extensive road mortality has been the main reason for the change of classification for this species. Their populations have no ability to compensate for this added loss to the adult population, and as such population health is put at risk. 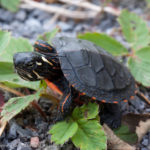