Report from the Annual General Meeting

Report from the Annual General Meeting

The 2010 Annual General Meeting was very successful and had a great turn-out.

There were a number of presentations including one from Tracy McNaught, updating the group on the many events and advances of 2009.

These changes included the move to our new facility and welcoming Dr. Sue Carstairs to our team, as veterinarian. Dr. Carstairs brings with her a wealth of expertise and we are thrilled to have her.

The move to our new facility on Erskine Avenue is both an opportunity and a challenge. The additional space allows us to perform more onsite treatment and facilitates an increased level of case management.

We are now faced with new expenses, however. We have never been faced with rent and utility payments and this presents a challenge in fundraising. There are also retrofits that should be made to the space so that the hospital is better able to service injured turtles. A lot of fundraising is being done through the sale of merchandise, fundraising events and through access to grant money. It is hoped that by increasing our fundraising efforts, expenses will be covered.

Dr Carstairs gave an informative and entertaining presentation detailing some of the KTTC’s turtle care highlights over the course of 2009. These highlights included the release of rehabilitated turtles to their native habitat, baby turtles being successfully hatched at the trauma centre, and a coordinated effort that resulted in a groundbreaking cataract surgery on one of our very large, very old turtles. It is hoped that, as a result of this surgery, the turtle will be able to be released back into the wild. What a great year!

Julia Phillips, Adopt-A-Pond Coordinator at the Metro Toronto Zoo, gave a presentation on her program and what they hope to achieve.

Adopt-A-Pond is a program designed to help the amphibian and turtle population. It promotes education, research, resource development and citizen science.

The mission of Adopt-A-Pond is to provide citizens “with the tools and resources necessary to create, restore, protect, and conserve wetlands and wetland biodiversity.”

Of the eight native species of turtle in Ontario, seven are at risk or are species of concern. Adopt-A-Pond encourages the public to do what they can to protect turtles, their nests and their habitat and to go to the Adopt-A-Pond website and record any turtle sightings so that a population record can be established. www.torontozoo.com/adoptapond

We also had a presentation from Little RES Q, which is a rescue organization for unwanted pet turtles. They prevent non-native turtles from being released into the wild and work hard to find homes for unwanted pets. Little RES Q also works to increase public education about turtles so that people make informed decisions when purchasing a pet.

The Red Eared Slider is the most common breed of pet turtle, in this area. It is not native to Ontario, but comes from the Mississippi and Gulf of Mexico. They are sold as small babies and people often don’t realized how big they grow or how long they live (Red Eared Sliders can live up to 40 years in captivity). They are now being spotted as a feral species in the wild in Ontario. 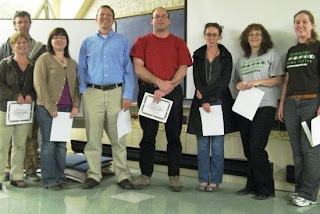 At the end of the meeting, a new board was elected. The members of the new board are: Tracy McNaught (returning), Annita Newell (returning), Lysa Borland (returning), Anne Trimm (returning) and welcome to Kathy Parker who is new to the board.
Last year was very successful and we look forward to continued growth and progress through 2010!