2009 Season a Success Thanks to Partners

2009 Season a Success Thanks to Partners 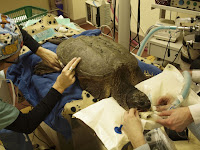 2009 was a very exciting year for the Kawartha Turtle Trauma Centre (KTTC). Although we were forced to relocate at the height of turtle nesting season, we still managed to admit over 65 turtles with the help of other wildlife rehabilitators, the Riverview Park & Zoo, and a dedicated crew of volunteer “turtle taxi-ers”.

Initial treatments were performed at partnering centres, includingToronto Wildlife Centre (TWC), former KTTC vet Kristy Hiltz”s Sherbrook Heights Animal Hospital, Cavan Hills Vet Clinic, Ontario SPCA Wildlife Rehabilitation Centre, and Bowmanville Vet Clinic. Once our new centre was ready and the patients were stabilized, the turtles were transferred back to KTTC for long term care. Many were released in the summer or autumn, but those with more serious injuries are over-wintering at the centre, ready to be released this spring.

These alliances with other wildlife rehabilitation centres were vital to the KTTC, without them we wouldn’t have been able to admit any turtles this past year.

But the collaboration also helped build capacity at partnering centres, giving them an opportunity to get more experience with turtle rehabilitation. One of TWC’s turtles received a cataract removal from veterinary ophthalmologist Dr. Joseph Wolfer, with the assistance of Dr. Carstairs (who works both at the KTTC and TWC), as well as Dr. Heather Reid, TWC’s head vet, and TWC Registered Veterinary Technician Maureen Lilley. The procedure made national news, as it was the first reported cataract surgery performed on a fresh water turtle.