Our new vet, Dr. Carstairs, has provided the following updates and photos of some of our patients. 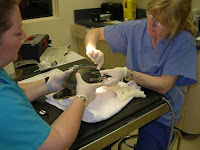 This guy was one of the first turtles to be transferred to TWC via the KTTC taxi service this past summer. He was one of the largest turtles taken in this year, although we do have another one that is 5kg larger! He had severe wounds from being hit by a car, and was treated extensively at TWC and has since been transferred to KTTC where he will finish healing, to be released in the Spring. 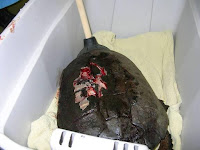 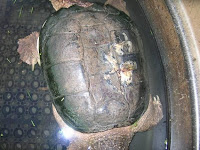 This Painted Turtle suffered a fractured plastron, which is is the lower shell. 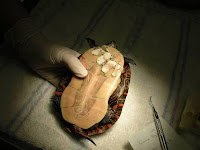 This Blanding’s turtle was brought to the Toronto Wildlife centre by another wildlife centre. Sue and the staff there repaired his very serious wounds, and he has been recovering there since. His carapace (upper shell) was fractured in several places, and he also suffered a practure of the bridge (where the upper shell and lower shell attach). He will likely stay at TWC for full recovery. 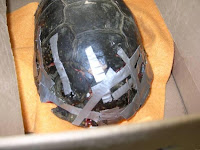 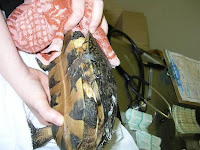 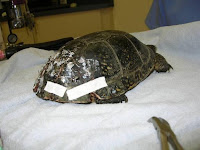 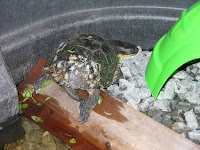 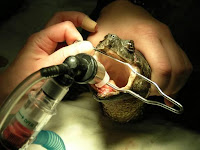 Fractured jaws are a common injury at the KTTC. Snapping Turtles cannot pull themselves into their shell, so their only defense from predators while on land is their “snap”. Unfortunately, this defense does not work against cars. This snapper was hit by a car in the Peterborough area, and was taken to the Toronto Wildlife centre, where Dr. Carstairs anesthetized him and performed surgery to repair the lower jaw that was badly broken. He recovered at TWC and then was transferred to the KTTC for further healing. Thanks to grant money received from the Shell Environmental Fund, and the TD Friends of the Environment Fund, the KTTC now has the ability to perform surgery onsite. Previously we had to rely on participating vet offices for x-rays and to perform surgery. But this fellow will get his stitches out onsite over winter! 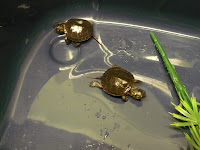 Baby turtles are no surprise at the centre, but always a welcome and happy event. The majority of turtles hit by cars every spring are females on their way to lay their eggs. Many of them never make it to their nesting site, but do end up passing the eggs while in the care of the KTTC. Our volunteers carefully collect the eggs as they’re laid, an incubate them, carefully noting which turtle each egg came from so they can be released at the right location. Sometimes, the mother turtle does not survive her injuries, as was the case with Pinky and Jo Jo’s mother. HOwever, since turtles do not provide any parental care for their offspring once the eggs are laid, these hatchlings stilll have a decent chance of survival – much better than if their mother had not been brought to us for treatment.

Hopefully by spring these turtles will all be ready to go home, like this fellow who was released this past spring. This snapper was brought in, during the summer of 2008, by the Metro Zoo. They had wired his jaw to fix a fracture. He stayed the winter at KTTC, and Dr. Carstairs removed the wire at the Toronto Wildlife Centre in spring 2009. 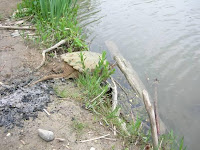 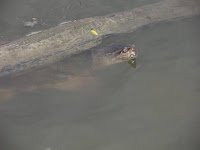