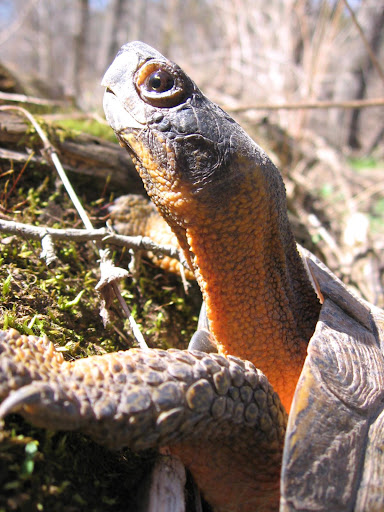 Ontario’s Endangered Species Act, 2007 (ESA) was passed into law in 2007, and came into force on June 30, 2008. Compared to previous legislation, this new law more than triples the number of species and habitats that are protected.

Of the 30,000 species that are native to Ontario, more than 180 are at risk. The Act defines an ‘at risk’ species as any native plant or animal that is in danger of disappearing from the province.

There are 5 levels of risk classification for species (Table 1). The ESA provides direction for governments, industry, resource users, landowners, and partners to ensure Ontario’s biological diversity. The Act focuses on the protection of species at risk, as well as their habitat requirements. In accordance with Ontario’s Biodiversity Strategy, the ESA promotes a productive and resilient ecosystem, by protecting biodiversity. Specific objectives to protect species at risk are outlined in the Act, including:

A major component of the ESA is to foster and support stewardship programs, including the Species at Risk Stewardship Fund. This fund was set up to encourage and support groups and individuals who voluntarily participate in stewardship activities to protect and recover species at risk and their habitats. There are also programs to support farmers and other landowners who voluntarily carry out selected practices that contribute to the protection and recovery of species at risk.

The ESA also recognizes Aboriginal and Treaty rights and encourages the incorporation of community and Aboriginal Traditional Knowledge in species assessments. Persons having such knowledge are recognized as having relevant expertise.

How does the ESA 2007 protect species at risk?
Before a species is afforded protection under the Act, it must be listed as a species at risk on the Species at Risk in Ontario (SARO) list. A recognized independent scientific committee, the Committee on the Status o

f Species at Risk in Ontario (COSSARO), is responsible for assessing and classifying species using the best scientific information available, based on factors that influence the species’ risk status. COSSARO’s recommendations regarding classification and status of species must be reflected on the SARO list within 90 days of the recommendation to the Minister of Natural Resources.

When a species is listed on the SARO list, the species and its habitat are protected under the Act, which prohibits the “killing, harming, harassing, possessing, buying, selling, trading, leasing or transporting species listed as threatened, endangered or extirpated”. The Act also provides habitat protection by prohibiting “damaging or destroying habitat of endangered and threatened species”. Importantly, the Act does more then simply dictate what one can and cannot do with a species at risk. The Act requires the preparation of recovery strategies for endangered and threatened species, and the preparation of management plans for species of special concern. Recovery strategies and management plans are science-based advice the government uses to recommend steps to recover the species at risk. Under the Act the government must provide the public with a response to the recovery strategy or management plan. The response must summarize and prioritize the recovery actions the government intends to implement.

What happens when someone contravenes the Act?
The Endangered Species Act came into force on June 30, 2008. If found guilty of being in violation of the Act, a first time individual offender can be fined up to a maximum of $250,000, and corporations up to $1 million. Depending on the offense, imprisonment is also a viable sentence. Under the Act, enforcement officers have the right to search, seize, make arrests and issue stop work orders if they find a violation of the Act.

How can I help ensure the success of the Endangered Species Act?
There are a vast number of stewardship opportunities for those willing and able to donate their time to protect our species at risk. While not an exhaustive list, contacting your local Conservation Authority, local chapter of the Ontario Federation of Angles and Hunters, Trout Unlimited Canada, and Ontario Streams, will provide you with useful information on local stewardship opportunities. If you are able to volunteer your time on a consistent basis there are longer term opportunities for stewardship including; Bird Studies Canada which operates the Marsh Monitoring Project and the Toronto Zoo which supports the Adopt a Pond program, among many others.

Not everyone has the time or ability to spend a day cleaning up shorelines or recording frog calls, but you can still help. Simply by reporting your observation of a species at risk to your local Ministry of Natural Resources (MNR) Species at Risk Biologist is a great help. Or, perhaps you can talk with friends and neighbors about the importance of protecting species at risk.

There are 8 species of turtles in Ontario, of which 6 are included on the SARO List (Table 2). Both Wood and Spotted Turtles are listed as endangered species, indicating immediate efforts are necessary to protect these species from vanishing from Ontario. Turtles are typically long-lived, slow to reach age of maturity, and have relatively low juvenile survival. Life history characteristics such as these imply that turtles are not able to readily adapt to a change in their environment and are susceptible to many threats. In fact, most turtle threats are wide-spread and ongoing.

The major threats to turtle conservation include; habitat loss (e.g., shoreline alteration), road mortality of migrating reproductive adults, nest predation, and human collection for the pet trade. Due to unnaturally high levels of nest predators (skunks, raccoons, dogs) juvenile mortality can be high in some areas. However, the most immediate and manageable cause of turtle population decline, road mortality, can be addressed. Road mortality can be easily mitigated by drivers, if they’re made aware of turtle crossing time windows (May-July) and areas (a road dividing a marsh or wetland). The ESA provides protection for listed turtle species and their habitats, a positive step to conserve Ontario’s turtles.

Sixteen turtle conservation projects have been funded through the MNR’s Species at Risk Stewardship Program from 2007 – 2009. Examples of these projects include: Outreach – educating the public about good and bad shoreline management; Monitoring – consolidating and updating turtle distribution and nesting information across the Greater Toronto Area; and Recovery – re-routing an ATV/snowmobile trail to avoid Wood turtle habitat.

Turtles and other species at risk may have a brighter future in Ontario due to the development and implementation of the ESA. Just as important, there is hope for these species, thanks to concerned citizens who value a healthy, native Ontario biodiversity.