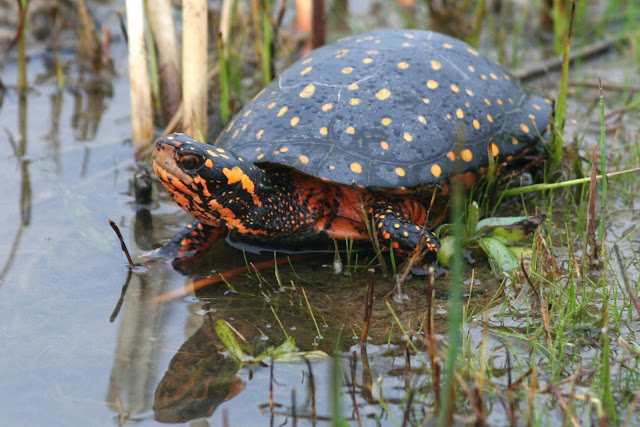 People who work in wildlife rehabilitation are supposed to avoid words like “cute” and “cuddly”. Wildlife in our care are just that – wild. We are not supposed to think of them as cute. That being said, the Spotted Turtle is one cute wild animal.

This is the smallest turtle you’ll find in Ontario, with adults growing to just 9-12 cm long. Along with the size, you can tell it’s a Spotted Turtle by the smooth, dark shell, legs and head, scattered with bright yellow spots. The Spotted Turtle lives in Northeastern North America. In Ontario small numbers of these turtles are found near Lake Erie, Georgian Bay and along the St. Lawrence River. Spotted turtles like small, shallow water bodies such as ponds, marshes, woodland streams, even ditches – anything with soft bottoms and lots of vegetation.

These turtles like their rest. When it’s really hot in the summer, they’re resting in cool wetlands or in forest leaf litter. During the “winter” (which may begin in early fall) the Spotted Turtle is dormant at the bottom of ponds and marshes (often grouped with several other Spotted Turtles). Their one period of activity is late spring. Like many of Ontario’s turtles, the female Spotted Turtle lays its eggs in late May or June. She will lay anywhere from 1-8 eggs, which hatch 60-80 days later. Like all turtles, the mother’s work is done as soon as she lays her eggs. Turtles do not sit on their nests, and as soon as the babies hatch, they know exactly what to do and where to go!

Like all turtles, the little Spotted Turtle faces some big threats; habitat loss, destruction of wetlands, water pollution, and illegal collection for the pet trade. These small gentle turtles are appealing to us people, and unfortunately many wild turtles are collected and sold as pets. (So, please, never ever buy wild caught turtles!). Turtle eggs are also eaten by animals such as raccoons and skunks. The Spotted Turtle is a “Species at Risk” in Ontario. It’s Endangered in Ontario and throughout Canada.