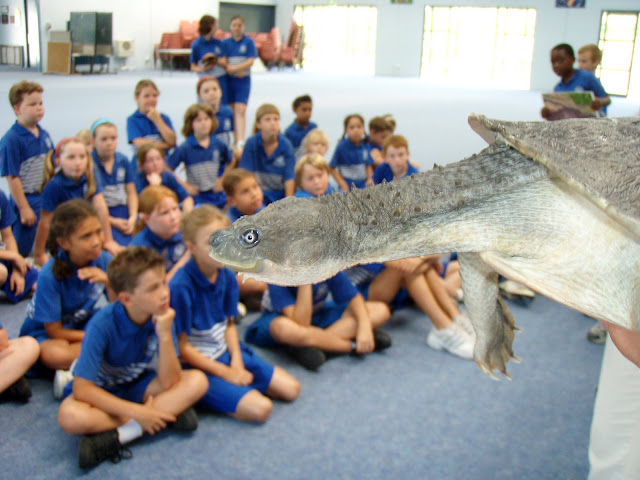 In Central Queensland lies the Fitzroy River and the city of Rockhampton. Rockhampton is known as the Beef Capital of Australia, but its real icon was there long before the Brahmans moved in. It is the Fitzroy River turtle (Rheodytes leukops), a freshwater turtle that was only discovered in 1980 and is endemic to the Fitzroy Basin. This fascinating species is often referred to as a “bum-breather” due to its unique physiology which allows it to breathe through its bottom. This is known as cloacal respiration and there are other freshwater turtles that are known to have this physiology but none quite so defined as Rheodytes leukops. This turtle has been studied in recent years and it has been found that they can stay submerged for over a week by obtaining oxygen through their cloaca. Within its cloaca are highly-vascular, gill-like structures called papillae that facilitate aquatic gas exchange. It is believed they obtain up to 70 percent of their oxygen through this mode of respiration.

The Fitzroy River turtle is listed as ‘vulnerable’ and is facing a decline in population due to nest predation and habitat disturbance. Like so many other native species in Australia, the introduction of feral species such as foxes and cats has had a devastating impact. Turtle nests have always had natural predators such as water rats and goannas (lizards), but with the introduction of feral predators, the balance has been lost and the turtles are losing the battle of survival.

With a team of over 30 local volunteers, ranging in age from 13 to 65, the project involved patrolling sections of the Fitzroy River which had nesting sites. From mid September to the end of November these sites were searched every morning at dawn for evidence of new nests. When new nests were found, a protective mesh was placed over the nest to keep predators from gaining access to the eggs buried in the sand.

In 2007 the team safely protected over 110 nests and with an average of 16 eggs per nest, it is estimated that over 1700 hatchlings reached the Fitzroy River. This was a huge success for the project and the nest protection patrols continue to this day. The 2008 nesting season saw similar success. In some cases the nests had to be relocated to safer nesting banks. This was due to either camping pressures or the turtle laying the nest too close to the river’s edge. In such cases, the eggs were carefully removed from the nest, measured, put in a box with sand and moved to a safer nesting bank. During the relocation it was imperative that the eggs not be rotated as this may have fatal results for the delicate embryo. The relocated nests had the same hatching success as stationary nests due to the delicate handling of the eggs.

Other aspects of the project include habitat restoration which involves fencing off nesting sites to restrict cattle access and weed removal to ensure the nesting banks are accessible for the turtles. The project received full cooperation from landholders to not only access nesting sites on their land, but also to erect fences where necessary.

The on-ground achievements of the project were very encouraging but perhaps the greatest achievements were those gained through raising awareness. Presentations on the Fitzroy River turtle project were given at local schools, community organisations, conferences and local events. In partnership with the Australian Freshwater Turtle Conservation and Research Association, workshops were held showcasing all the species of turtles living in the Fitzroy River. These live specimens were captive bred turtles and commonly used for education purposes across the state of Queensland. As the Fitzroy River turtle is normally such a shy and uncommonly seen animal, this workshop provided the local community the rare opportunity to see one up close and personal.

The local community were finally getting the opportunity to learn all about their local turtles and how they could help protect them. School children were excited to learn all about the “bum-breathing” turtle that lived in their local rivers. The project attracted media attention with spots on local and national news and the TV program Totally Wild. The Fitzroy River turtle is finally on the map and on the minds of Australians, both locally and nationally. The future is looking a little brighter for the shy turtle of the Fitzroy River.

About the Author:
Lesley Hale, a native to Belleville, Ontario, managed the Fitzroy River Turtle Conservation Project for 3 years in Queensland Australia. She is now volunteering with KTTC and helping with the Wood Turtle Recovery Strategy.